Why different prices? Which one is mine? Check rate type
Shipping costs: 8,46€ *

Description
Protection elements against the theft of information from cards or devices with NFC or RFID chip. Avoid the cloning of cards or payment devices by NFC by detecting the wave generated by an RFID / NFC device commonly used in payment systems, it generates an electromagnetic field that protects your device / card with NFC chip.

Battery charging cycles
When calculating the life of a battery it will be necessary to know the number of charge cycles that can be performed until the battery does not begin to lose its capacity.
Depending on the type of battery these charging cycles can vary, the most common being the mobile batteries, manufactured Li-Ion or Li-Po, which have a duration of between 300 and 500 charging cycles according to model and manufacturer.
Once thisE limit we will notice how the battery loses duration of operation, arriving to lose up to 25% of its capacity of load.
At this point it will be necessary to evaluate a battery change.
It should be noted that usage and charging habits can significantly affect battery life. For example, factors such as heat, charge the battery several times a day without it is almost exhausted, etc. Will be affectedits duration.
Therefore, to get the most out of the battery we must know when a full charge cycle is performed, and try to avoid misuse of charge, to increase its useful life.
A charging cycle is considered when the battery has been discharged or its 100% charge has been used.
The manufacturers advise that the charge is never made below the 58% battery, since the battery voltage would not fall so lowTo, so you could end up winning up to 4000 charge cycles.
Tips to increase the life of a battery. Below is a table with theDifferent voltages (V), charge cycles (C) and battery percentage (B). 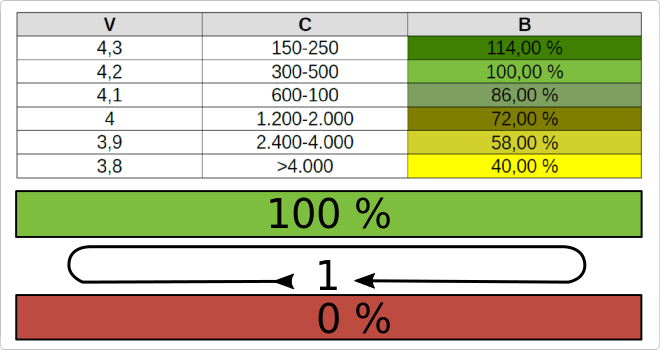